Svedino’s Automobile and Aviation Museum is one of Europe’s largest combined collections of vintage cars and aeroplanes. The collection comprises around 100 cars, 40 aeroplanes, engines, household articles and much more. The museum was opened in 1961 and was then the first automobile museum in Scandinavia.

The collection was created and run by Lennart Svedfelt (1924-1993), also known by the stage name Svedino. As well as being a collector, he was a conjuror and “pickpocket”, and appeared on stage and TV until the early 1990s. At the time of the museum’s 25th anniversary in 1986 Lennart Svedfelt wrote the following history of himself and the museum:

“I have always had a great interest in cars and aeroplanes. As a schoolboy I built model aeroplanes, and in 1941 I had my first exhibition in the city library in Stockholm. In October 1942 I started a model aeroplane company which manufactured and sold model aeroplane kits all over Sweden. The factory was on Fridhemsgatan (in Stockholm) and the shop on St. Eriksgatan. In 1949 I bought my first “vintage car”, a covered 1919 Model T Ford. Even then I began to realise the historical value old cars could have, an insight not shared by my parents and friends.

In 1953 Lars Vidding wrote an article about me and my five cars in the newspaper Expressen. Through this article I received many tips about where there were old cars, and the collection began to increase. The problem was finding a suitable place to store them in the Stockholm area, which was not easy but was solved in the end.

The breakthrough with my cars came in May 1957 when I hired out the collection, which then amounted to around twenty cars, to the open-air museum Skansen and the exhibition “Grandfather’s Car”. Several film companies also began to hire the cars for various productions, and the idea even began to be a bit profitable. I bought a small circus tent and continued the exhibition myself during 1958.

In association with a Press Tour the tent was put up in May in Norra Latin schoolyard by the square Norra Bantorget in Stockholm. Then the exhibition moved on to Vällingby and then to the Furuvik park outside Gävle. In 1959 the cars “rested” and I travelled around amusement parks performing as a conjuror and “pickpocket”, and by financing the collection through performances it could be said I began to “steal” my way towards getting my museum. In the early summer of 1960 the cars were transported up to Östersund to be one of the main attractions of Expo North. At this time a suitable plot had also been acquired on the West Coast, more precisely in Ugglarp on the coast road between Halmstad and Falkenberg in the county of Halland. The building of the future museum had begun so that after Expo North the vintage cars could be transported to Halland.

The opening of the museum took place on 20th June 1961 and Aja Lindell, the wife of the Lord Lieutenant of Halland, officiated. She arrived at the opening in the museum’s black 1928 Cadillac. The opening of the museum received much attention from the press and TV, as Scandinavia’s first automobile museum. The display area at that time amounted to around 550 square metres, and the number of cars on display was 35. The oldest car in the collection at that time was a Swedish 1905 Tidaholm with chain-drive, wooden wheels with massive tyres, and a top speed of 15 km/hr. Volvo was represented by an open passenger car from 1928, and the most exclusive car was an American 1918 Pierce-Arrow which in its time was the most luxurious thing on the USA car market, equalled only by Rolls-Royce in England.

During 1964 the museum was extended to around 800 square metres of display area, and the number of cars increased to 50. The first aeroplanes in the collection were also added now, a German Heinkel from 1925 and an English De Havilland Moth from 1926. In 1970 the premises were enlarged to 2000 square metres, and a number of cars and aeroplanes stored in barns in the area could now also be displayed. The collection grew to 90 cars and 14 aeroplanes that year. Some old bicycles, motorcycles and horse drawn carriages were also included in the museum. The next stage in the development took place in 1980 with a further extension of 1000 square metres, making room for more exhibits.” 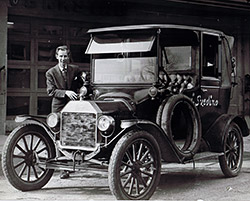 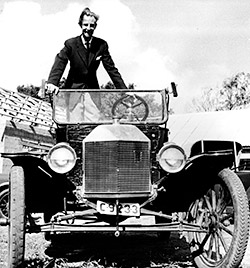